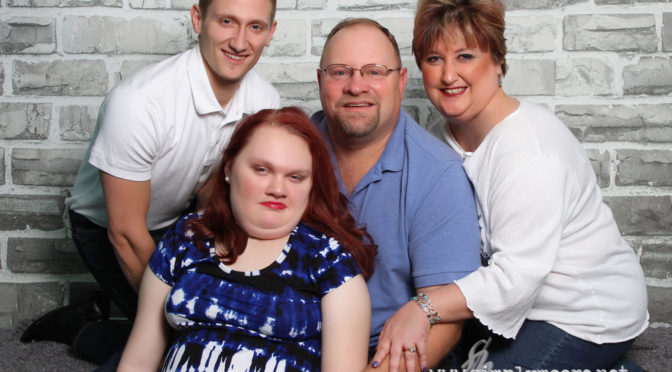 because it’s going to be a sad one.  The ending of the story hurts my heart, but I really want to tell it. In December, I was asked by Parenting Children with Special Needs magazine if I would be able to photograph a family for an upcoming
cover story. I am always super happy when I am asked to do these photo sessions, so of course I said yes. When I found out who the family was, I was even more excited than usual.  The family was the Williams family, and the special little girl was Miranda.

I have known the Williams family since before they were even a family as I have known the mom, Michelle, since we were on the younger end of being teenagers. I knew Michelle when we played violin together in the Raytown High School orchestra, and she was “my ride” to school for several years until I learned to drive. I remember sitting on my deck with her when she told me she was having her first baby, Trent, and I remember thinking she was the strongest friend I had because she went to school, worked, and was a mom all at the same time.

As time does, we

drifted into our own worlds, but we crossed paths a lot through the years. Michelle married Randy and they had a daughter, Miranda. I even started seeing them at my kids’ school because Miranda and my boys went to the same school. I remember seeing Michelle and Miranda at the school carnival one year, and Miranda looked so cute in pigtails with little bows on them. Shortly after that carnival, I

found out that Miranda had been diagnosed with a disease. I am not going to pretend I know what the disease is all about, but it’s a mitochondrial disorder called MERRF, and there is no cure.

are with me being asked to photograph Miranda and her family for the magazine. We had initially thought we would do the photo session in December, but Miranda had a bought with pneumonia and the poor girl was in the hospital for weeks. She finally made it home in January, and I drove to their house on a super cold and rainy Sunday to set up my traveling studio at her house.

I brought a couple backdrops with me, my lights, and an assistant, Amy. Miranda has quite the teen-ager pad set up in the basement.  She has two brightly colored rooms to herself, and they are both covered in posters and picture

s. Amy and I got all set up while Miranda hung out with her cousins and two aides. These two aides must be angels sent directly to Miranda. Both of them doted on her, and never lost focus of keeping Miranda happy and safe.

Miranda was just a few days shy of 15 years old on this day. Even though she spends a lot of time in a wheelchair and isn’t super verbal anymore, Miranda is still as sassy and spunky as every teenage girl i have ever met!

This girl has bright red hair and loves her make up! She was wearing the prettiest lip color ever that day, and I learned all about her LipSense addiction. The funniest thing happened when Michelle walked in and Miranda saw her lip color. Miranda started pointing to Michelle and seemed somewhat agitated. As it turns out, Michelle was wearing Miranda’s LipSense, and Miranda totally knew! I was cracking up!

For our first set of photos,Miranda sat in her wheelchair, and I posed her Mom, Dad, and Trent around her. After some family shots, I asked Trent to sit on the arm of the wheelchair next to Miranda. I should have done this pose earlier because Miranda lit up. Her entire face was smiling – this girl loves her brother. I found outthat Trent has been helping take care of Miranda, and it was clear to me that she loves it. How special is it that these two siblings get to spend so much time together?

Miranda was only able to whisper on the day of our photos. Her disorder has weakened her vocal chords, so it’s a huge struggle for her to speak. She does a lot of communication with her eyes and with her smile. I definitely picked up on her language by the end of our session.

I also quickly found out that Miranda is a daddy’s girl – she loved when we sat her on the floor for some shots of her leaning on her d
addy. We added in her mom and brother as well, and we were able to get a series of family images sitting on the floor. Most of Miranda’s

smiles happened when her two awesome aides were behind me squishing slime into a small canister so it made farting sound. We were all laughing!

I guess I should mention that Miranda has a cart of machines that follows her bright pink wheelchair everywhere she goes. At one point during the photo session, somebody mis-stepped and landed on part of her ventilator and broke it. I was completely impressed when Michelle immediately took control and explained to Miranda’s nurse where the spare parts were.  The two of them got the machine fixed fairly swiftly, but I was honestly pr

etty panicked that Miranda would have no air. The girl just sat there calmly and waited for them to fix her vent. That’s how you know when a person completely trusts another – Miranda never panicked because she knew her mom had the situation under control.

After about 90 minutes, we finished up the photo session. I came home and got to work prettying up the images we had made. I loved working on them, and was sending sneaks over to Michelle on facebook. I was literally so happy that I was able to make these images for her. I think Miranda had a good time too, and that is always important to me as well.

The magazine came out about a month or so later, and as usual, I was completely proud to see my photogr

aph on the cover. I was extra happy that it was a photograph of my friend and her family.  A couple weeks after the article debuted, Miranda’s doctors told her family that it was time for hospice care. Miranda’s body was too tired to fight any more. When I heard the news, I was just so sad. I have seen hundreds of photos on facebook showing friends and family coming to see Miranda and say good-bye. It seems like all day long during this week, a stream of photos of friends and family with Miranda takes over my feed. I love it.

I started writing this blog last week, but I could never finish it because I would just get sad. Last night, though, I read the news that made me even sadder. Yesterday, on Easter morning, Miranda smiled her last good-bye. I will never understand why little children have to take on these massive diseases, and I will never understand why a parent has to say to good-bye to their baby. Like I said at the beginning, there is no happy ending to this story. I am happy, though, I was able to make these photos for Michelle and Randy and Trent and all the family and friends who love Miranda. She will be missed by so many people, and I hope her photos can bring a peace to those who love her.